The BAA takes Nymbol for a walk Posted 9 years, 3 months ago by Mark Steadman

It's been a long road for Nymbol - and we're barely left our front yard - but thanks to the Birmingham Architecture Association, we're delighted to announce the first app powered by our mobile CMS, Walking Architecture: Birmingham, or quite simply, the BAApp. It's a great way to discover some of the historic and diverse architecture of the UK's second city. 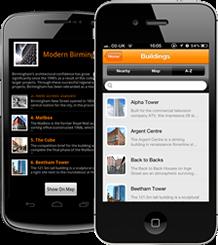 We've provided the engine that powers both the new Android and iOS apps, which allow the BAA to manage their list of buildings. They can manage text, photos, videos and more to each building, and allow mobile users to submit their own comments and even upload photos, which are managed alongside the curated ones.

The BAApp has been migrated from a custom-built CMS into Nymbol. Taking the data across was pretty simple: we took the original database, created an XML file that Nymbol could understand, and just uploaded that. Our CMS allows content curators to setup their own custom data fields and edit them really easily, which is part of what makes it so flexible. And for mobile development, the RESTful APIs made searching, retrieving images at any size, and even uploading of content really simple.

Along with the launch of the new app, the BAA announced a photo competition which encourages people to upload their own newly-shot or previously-archived photos. It runs until 3rd March, so to have a go, just download the app to your smartphone:

Nymbol is still in closed beta, but we're looking for new people to testdrive the system and help shape our growing (but already pretty awesome) API, so if you have an app that's based on real-world objects or places, get in touch and we'll set you up with a six-month free trial.

If you have an interesting project for us, do: get in touch